Trip to Japan. Part one - Tokyo

So, I've finally returned from Japan. I'd like to share my "road-diary". I need some time to arrange my records, so I'll split them in several parts.

First day in the way. I'm going to Moscow as there's no direct flight to Tokyo. RZD surprised me giving ticket for 37 place in the car where there were only 36 places. In such way they sell places in conductor's compartment. Another pleasant surprise was that I had a ticket with included dinner. However, I haven't understood why they brought cake before chicken...

One more day in the way. Moscow is as always crowded. After waiting for about 6 hours for my plane in Domodedovo and 9 hours night flight I'm feeling sleepy. Funny case in the plane. I've ordered tea. Got a bottle of gin. Asked "is it a tea?". Got reply, yes, this is tea. Hm… At home I'd like such tea, but in the road I'd like to avoid drinking alcohol. Luckily, another stewardess understood me better. 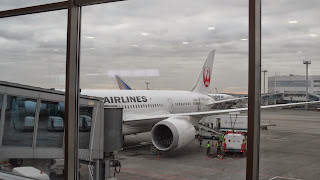 The morning begun sharply and suddenly with Sun blinding me from the . window. The weather was perfect. I saw blue ocean and green land. I had to fill two blanks for foreigners and was afraid that I've done something wrong. However, custom officer just looked that all fields are filled and asked for the intended duration of my stay in Japan. 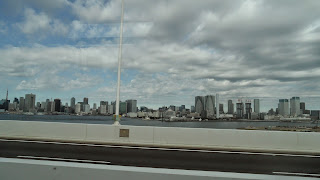 As for yens, we changed money in the airport. 1 dollars is roughly equivalent to 105 yen. To convert prices from yens you can divide by 100 and get price in dollars (or by 2.5 and get prices in roubles).
The first shock is that not everyone speaks English. Expected, but unpleasant. Luckily, even when people don't understand you, they always try to help. But more on this later. Now we were moving to the Tokyo television tower. Precisely, to the Buddhist temple by the tower. They say that the tower itself was constructed as a copy of Eiffel Tower. Don't know, it seems similar, but different at the same time. 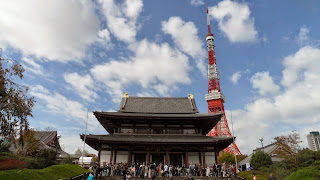 There was a concert in front of the main temple, so we entered smaller one. Today is a Culture day and at the same time the birthday of Meiji Emperor (the one who like Peter the Great in Russia cut a window through to Europe for Japan). We've visited service in the temple. Buddhists are practical people - if you pay for the service, the monks will held one for you even if you are not a Buddhist. I've took a picture of the place where people tie ribbons with monks guidances. All predictions, guidances, amulets are valid only till the end of the year. You have to return them to the temple till the end of December and get new ones in January. 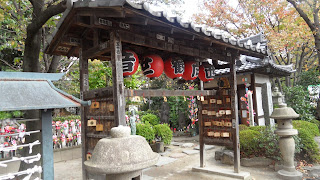 There are also statues in temple's garden. You can order one for you. This statue is devoted to the childrens of your family. You should dress them in caps, bring them toys and candles for your children to prosper. Periodically caps and toys are renewed. Statues stay in the temple's garden forever. And burial urns in the local cemetery - no. You should pay significant rent for the monument on it. Each monument holds several urns, perhaps, for the whole family. If no one pays a rent, the place is sold and urns are transferred to the common store inside the temple. On the photo you can see some ski-like sticks. They mark the number of prayers which were held for the dead. 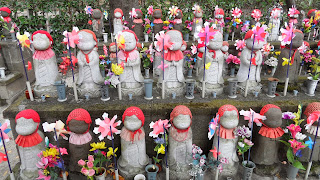 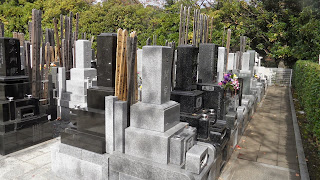 There are also shogun graves in this cemetery. But this part of cemetery is opened for visitors only once per year. In the common part of the cemetery there is one outstanding tomb - the tomb of Emperor's wife who tried to prevent bloodshed between 14th shogun and Emperor in 19th century, when Emperor brought back true power from shoguns. 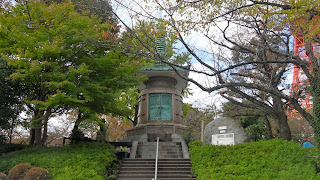 The last part of the day was devoted to visiting thermae. As I don't like public baths, I just read the book in the common place ahead of baths. Japanese in kimono look nice. But I think it wouldn't suit me :)
A real surprise was non-european sockets. And lavatory pan with a dozen of buttons (it was hard to find out the main one :). In the evening I've went to Indian Cafe. Interesting experience. I've ordered meat with spinach. When I got it there were more spices than meat. Seriously, I firstly thought that it was some sauce for the meat…
After buying a phone charger found interesting device in the hotel room - a charger for everything (this device has a lot of connectors for every gadget). Unluckily it didn't suit to my camera and I had to ask for Japanese-European adapter at hotel registry. 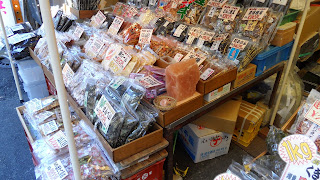 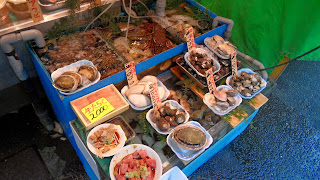 Then we visited garden near Emperor's palace. However, we were not allowed to enter deep into the garden, because there were some officials in the palace. So, we went to Shinto shrine. We were lucky enough to see traditional marriage. Also, near the temple, we saw girls in traditional costumes. At some age girls should be blessed in the temple. This particular temple was devoted to Meiji Emperor. Near the temple there are two lines of barrels for Sake and wine. On the barrels there are labels of wineries which make donations to the temple. 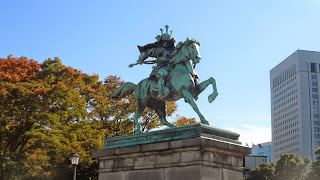 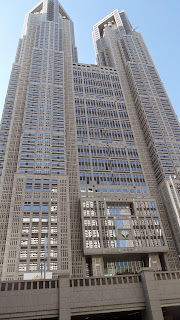 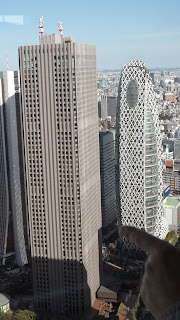 Later we were visiting viewpoint at the 45th floor of some administrative building. They say the design of the building was inspired by Notre Dame de Paris. And they plainly have something common. 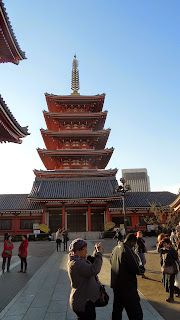 After dinner we were brought to one more temple (this time Buddhist). On the ceiling of the temple you can see the dragon fulfilling wishes of the congregation. 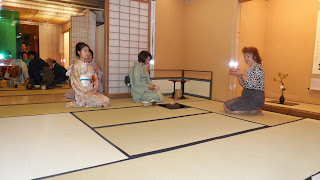 Then we visited tea ceremony. My groupmates were whining that it was too long. But I liked it - at last something national and colorful. In the evening I joined several groupmates and we were walking along Ginza. One of them was citing the poems she wrote. They seem rather nice. 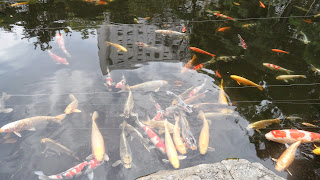 In Tokyo we were staying in Grand Prince Hotel Takanawa. Really nice hotel. It has a beautiful park. The park even has a pond with big and vivid fish. There is a small Buddhist chapel in the park. 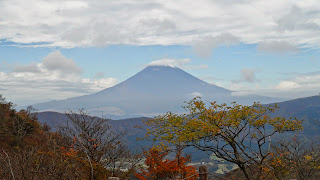 Today we went to some lake by Mount Fuji. The view is picturesque, but today is rather cold here. Why we were sailing across the lake, I became frozen. The ship we were sailing at was made in some medieval style - with sails and cannons. There even were some pirates on the ship which begged money for making photos with them. During our journey I saw several shrines and temples on the banks of the lake. I tried to find some alcohol in nearby shops, because was frozen, but without any luck. Only when we went up by rope-way, I had some luck in finding sake.
We saw the valley of geysers. Local people boil eggs in their water. As water contains a lot of iron, the eggs become black (only the shell, the egg itself is usual). They say that such egg prolong your life by 7 years. Don't know, I haven't eaten it. The eggs are sold to tourists in any forms: the eggs themselves, the toys in form of eggs, the chocolate in form of eggs and so on. 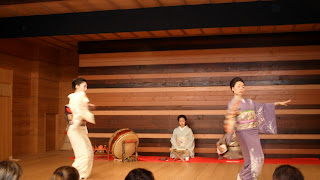 The next stop on our way was at the house of geishas. A strange art. I can't understand what they study for 20 years. But resulting performance is beautiful. However, the music is a bit mournful (reminds me of Mongolian music).
The last point of our program for today was one more public baths. As I don't like it, I walked by the nearest village. The village itself resembles my mother's homeland. There are buildings on both side of the road. Small houses - hotels, museum. Mountains surround the village. Pine trees grow surround the route. The difference is that there are much more trees and expensive cars on the road.
On the way back the guide has told us about life in Japan. I don't like to live such life: marriage matchmaking, working 24 hours per day, wifes manage the house. There are no free high education. Scholarship should be returned after graduating. And, of course, Russian girls are prettier :)
Автор: Alexander Pyhalov на 03:02 0 коммент.